I promised that I would pay my Joesky tax for hyping up the book that I'm illustrating, Mike Evans' Hubris setting for DCC. Without further ado, I present to you a thing with which to play, Gutter Gills, in the vein of Hubris as I see it: 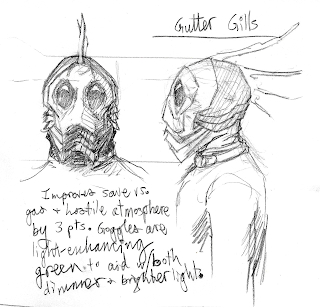 Although their origin is lost to antiquity, gutter gills were recently discovered by weak and squishy humans who couldn't handle the mutagenic choking clouds roiling beneath the equally weak cities they continually build. Instead of becoming monsters from exposure, humans could now venture deep below their settlements, seeking out whatever awful things humans tend to seek out underground and providing a rare treat for the hungrier denizens of the mythic underworld.

A set of gills will turn up unexpectedly in a dusty pawn shop at discount prices; or, just as likely, on the head of a deceased explorer. Kings have found them in the boudoirs of their least trustworthy romantic interests, and beggars have been gifted them by classist aristocrats in passing. Only the need for their function can temper the difficulty of their possession.

A few gutter gills refuse to be removed from their wearers, and will choke the poor humans who attempt to remove them. These ornery gutter gills slowly starve and dehydrate their owners, and will attempt to properly strangle their dying owner near to a place they are likely to be found by another human.

Some gutter gills work out a deal with their wearers - daily sacrifices, that is, which can take a variety of forms: bloodletting, bootblacking, smeared tropical fruit, trips to the brothel, fresh heads to choke, and so on. A gutter gill may behave nicely for a few hours or a few weeks depending on the merits of the sacrifice.

Gutter gills absolutely despise cleaning chemicals, and a good bleaching is one of the only known ways to remove a particularly churlish or lethal specimen. While effective, this requires a good dousing which can often drown the wearer or leave them with nasty chemical scarring.
Posted by David Lewis Johnson at 3:26 PM