Notes from the Book of Work-Doodles

Sketchbooks save minds. A quick dash in the sketchbook can help keep you sharp on days that you can't devote a lot of time to finished pieces. Its also a great opportunity to work out some design problems, wrestle with difficult subjects, and prepare for executing fully-informed larger pieces.

Sketchbooks defy sacredness. Sketchbooks should be foul, nasty, scribbled/painted-in, bloody, imperfect spaces where your job is to experiment and screw up as much as possible. No blank sheet deserves the deference given to a blank canvas. A good tip for breaking ones' habit of fearing the blank page of the sketchbook: draw only in pen for a month, working as quickly as you can, and do it every day for that month. This will help you grow comfortable with screwing up, building the confidence to roll with mistakes. Ink may be unforgiving in its permanence, but your design mind will find ways around even the worst screw-ups if you let it.

I thought I would post a few sketchbook drawings here with the hope that other folks making art in the gaming world would be willing to share some highlights of theirs as well. 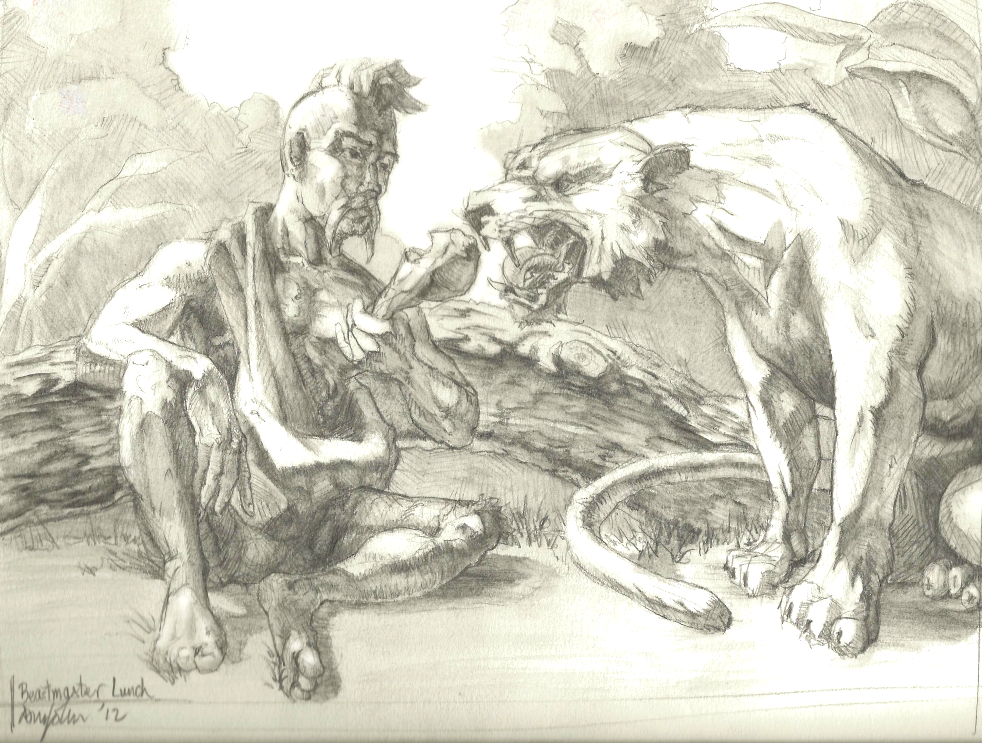 This is a sketch I made on some downtime at work for Robert Parker's adaptation of the Beastmaster class for his game world, Krul. The following sketch came from the shape of my boss's nose, and from there I imagined a space-faring religious zealot. I think the vacant/reverent look captures the idea pretty well for a sketchbook entry. 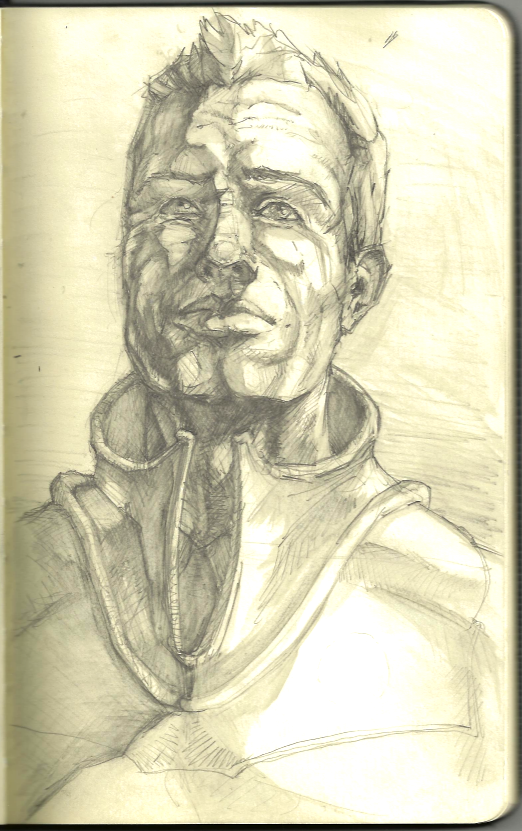 Also, I like to throw in some acid-tinged idea collages together with some watercolor and ink, like this: 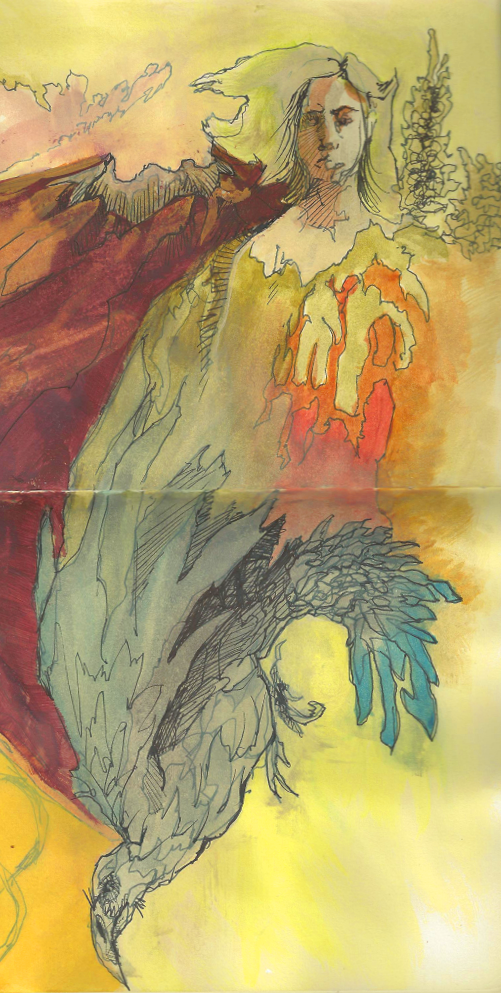 I like bug people - here's a digital mash-up of three bug dudes from the sketchbook that I drew in the same afternoon using a Pilot V-5, a white China Marker, and some saliva: 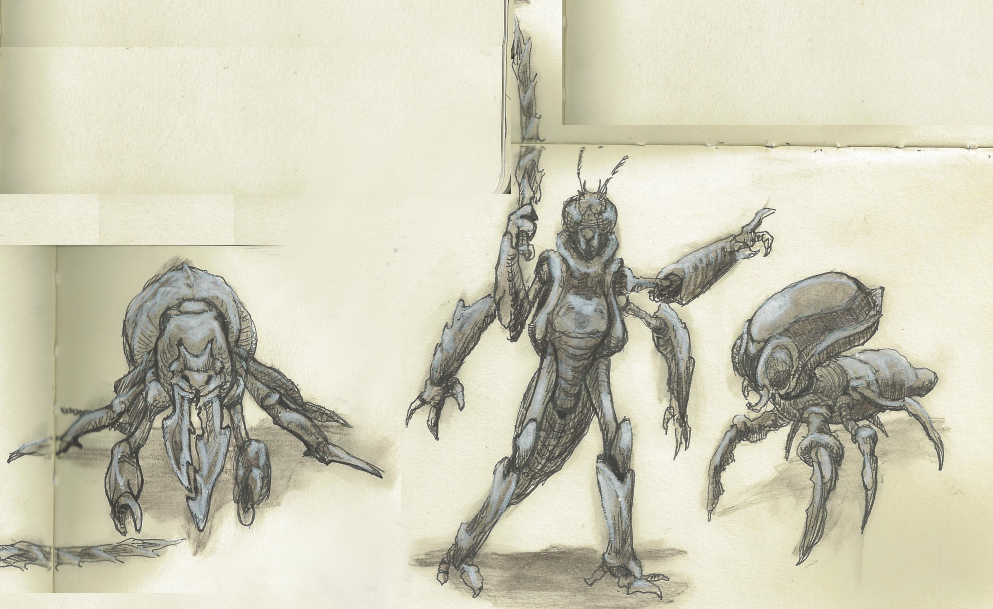 I also like to keep it pastoral, in this case using the same tools as with the bug people: 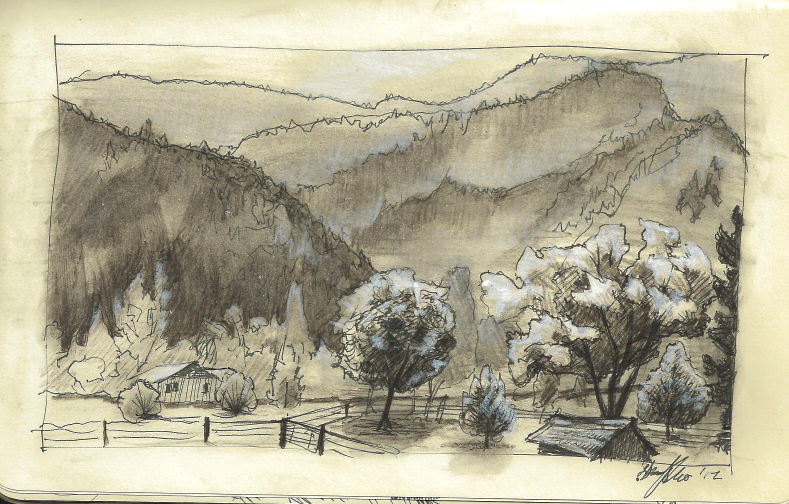 Some sketches demand more time, some only a few minutes. Every one of these has mistakes throughout, but the sketches still come out all right, and more often than not I end up learning something or plotting a better way to draw something in the future. If you have some pieces to share from your sketchbook or happen to know someone who does, let me know! Dig.
Posted by David Lewis Johnson at 9:40 PM No comments: