We finished EDM's gear last week and we think it looks pretty darn slick. Nathan Herbaly started EDM with some of his co-workers at the Seattle Art Museum, and their job is to craft historical installations for public education around the greater Seattle area. Three cheers for history! We hope to see their installations pop up all over Seattle this year. Props to them! 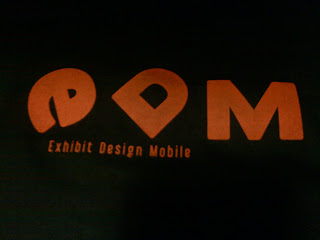 Posted by David Lewis Johnson at 12:46 PM No comments:

Howdy folks! My long time friend, Rachid Abdel Ghafour, is about to launch his new black metal album under the name Zebulon Kosted, "Swords of the Hordes," and I was fortunate enough that the he honored me with the task of designing his new logo and printing his shirts!

The logo at the top of the image was built in the open-source vector program Inkscape, and was crafted using the backdrop of Triple Divide Peak up in Glacier National Park. This logo you can see at the top of the shirt image. The skulls and swords drawing was scanned in from a good friend of his in Indonesia who gave it to him when Rachid toured there last spring (lucky dog!). I halftoned the image using the GIMP's 'Newsprint' function under Filters>Distorts>Newsprint, which I set to input DPI of 300, output LPI (lines per inch, which is the mesh count for my screen) at 160, and went with the default dot size for that. The resulting halftone was a little large, but worked beautifully with the vector logo.

The combo raster/vector had no problems printing at size as an EPS file, so my next experiment is to build color channels and assign them swatches in GIMP, the import to Inkscape and see if the swatches remain. If so, that means a pre-press technician should be able to output individual color layers from Inkscape much like you would a .DCS file from Adobe Illustrator. If anyone has a good line on a PostScript device for use with outputting color seps in open source, I would love to hear about it. Stay tuned!
Posted by David Lewis Johnson at 3:36 PM No comments:

First Week Down, More To Come!

The shirts came and went, the ink flew like magpies (at the very least), and we put out some killer merch for local hard rock band, the Balboas. Presley and his bandmates play super tight and work really hard to put on a good show for the kids. They played the Dark Horse (metal bar here in Missoula) with out-of-towners 3 Pill Morning and it was a blast. Here's a shot of Presley singing along with his merch spread. 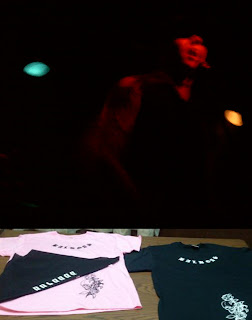 This coming week, we'll be printing black metal t-shirts for Zebulon Kosted as well as Exhibit Design Mobile, a mobile historical exhibit building unit out of Seattle. More pics to come. Part of the Zebulon Kosted job will include documentation for outputting halftones for screen with The GIMP, so hopefully other print-minded folks will find that information useful for their own workflows. We will continue to post pics of new jobs as we run them. Thanks!
Posted by David Lewis Johnson at 6:25 PM No comments: