As a long-time participant in and recent refugee from the rock scene here in the Northwest, I sit in a unique position to be able to make artwork for a number of my friends' various musical projects. Of particular interest here in Missoula is the band Monks On Fire. They won the local college radio show competition and as a result get free recording time to finish up their second 7". I am working on completing the album art for both recordings as well as a number of other, more hushed projects for these gnarly dudes, but for now I would like to showcase the poster and sticker art I've made for them in the last couple of months. Being the first poster I made for the Monks, this was a blast to design as well as an enjoyable bit of exploratory illustration. Prog rock's longstanding love affair with fantasy art made this an obvious match, and the Monks' bombastic drummer, Dylan, who commissioned the art, pretty much let me have free reign. After constructing the basic scene I used a little force perspective (read: took liberty) to get the assassin leaping down from the ceiling. I don't always use warm colors up front and cool receding, as it sometimes doesn't make sense depending on environment, but I felt the reds and purples put the assassin right where he needed to be when I squinted my eyes. I also kept the drafting lines a little loose, allowing some of my 'inking' to show - a practice I rarely use in digital paintings, but one which seems to function well for simplifying figurative work. 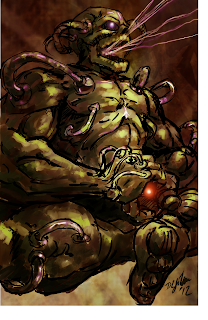 This piece was done for the end of August, when MOF played with another proggy, keyboard-laden post-rockish band called Modality (they kill it, three times over). The idea was to contrast the Monks theme with technofuturism. The result was a meditating colossus of fiberoptic cables, laser beams, and (of course) a human skull. I kept the base painting abstract, with patches of light to hint at searchlights in the night sky. Also, the ink lines were made most prominent, gestural, and simple. I dig pursuing a cartoonish feel now and again, and Dylan appreciated it as well.

I love drawing predators. I love drawing women. And I always enjoy the opportunity to render in black and white. This piece speaks for itself and will make for a wonderful sticker when they get back from the printer. I can't wait to put one on my laptop! Monks On Fire have an upcoming show with a band called Reptillian Shapeshifter, so this image practically drew itself. Hazy atmospheric lighting, mountain lake background, and the dead tree add up to complete the intended menace of the lizard man's assault. I backed off the linework for this one, keeping a bit of the pencil work but mostly rendering with softer paint strokes using the round brush.

There are more Monks On Fire pieces scheduled to post this month, but before that I will post some about Arcane Knights and talk about process for the Zoetic Moon paintings for The Savage World of Krül, which were recently displayed over at Rogues and Reavers. Thanks!