My good friend Reggie Herbert started a band a couple of years ago called Shramana, which is a special kind of anti-superstitious wandering monk, here in Missoula. Reggie rocks guitars and sings the songs while Levi kills and kills the drums, and they've written a killer/sick/rad album called 'Dreaming As Punishment.' They've got tight grooves and bring forth mountains of sludge and dirt from the underbelly of the Rockness Monster.

At their inception, Reggie was awesome enough to ask me to print their first round of t-shirts and patches, and we spent an awesome afternoon getting those done. Fast forward two years, and Reggie asked me to bust out the album art and a revised logo for 'Dreaming As Punishment.' Of course, sir! Would love to! They put the image on both the album and some full color pins, which was a great bonus! Here's the original art for the cover: 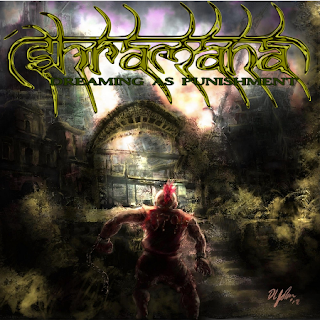 My god, this one was fun. All crit and feedback appreciated as per usual. You might want to check out Shramana's band page or Reggie's local music blog to get a good feel for these rad dudes. Thanks!!!!!!!!

Posted by David Lewis Johnson at 7:00 AM